Sacramento County CA won't let you work on your own car (or anyone else's) in your own garage, except under the most limited of circumstances.

Incredibly stupid and beyond the limits of idiocy.

Posted by Johnnygeneric at 2:07 PM No comments:

After Years of Threats, Schwab Joins Exodus, to Move Headquarters from San Francisco to Texas

The Great Wolf Richter brings us a blockbuster report:


“As we’ve said previously, our strategy is to maintain our headquarters in San Francisco, where the firm was founded,” said a Charles Schwab spokeswoman in December 2016. The company had threatened to leave San Francisco in an arm-twist tactic with its landlord as its office lease was coming up for renewal. It worked apparently, and Schwab renewed the lease on its 417,000 square feet at 211 Main St. for another 10 years, and San Francisco breathed a sigh of false relief.

At the time, it had already made the decision to build a new campus in Westlake (northwest of Dallas-Fort Worth Airport), Texas. In October 2018, it filed plans to more than double the office space at the Westlake campus to 1.16 million square feet to accommodate up to 7,000 worker bees.

Schwab talked a good talk and kept the cat toy jiggling. SF was happy to watch the cat toy and leave Schwab alone. Otherwise, SF and the whole state of CA bureaucracy would pounce and scratch the company's eyes out as it sucks as many taxes, penalties and fines out of them as they possibly could. And then once done (if there is a such thing) would bid a final “don’t let the door hit you in the ass” thanks-for-nothing farewell.
Posted by Johnnygeneric at 7:20 PM No comments:

I wanted to push on this point of what wind turbines are doing to birds.  And I just can't get over the SILENCE as the response to all of this.


In 2017, a team of scientists warned that the hoary bat, a migratory species, could go extinct if the expansion of wind farms continues.

“Unprecedented numbers of migratory bats are found dead beneath industrial-scale wind turbines during late summer and autumn in both North America and Europe,” writes Paul Cryan, a research biologist with the US Geological Survey.

Come on, you might be thinking. Surely there are greater threats to migratory bats than wind turbines?

Cryan is emphatic on this point. “There are no other well-documented threats to populations of migratory tree bats that cause mortality of similar magnitude to that observed at wind turbines.”

Another leading bat expert, Patricia Brown, agrees. More than a decade ago she warned California energy regulators that wind turbines could be the “nail in the coffin” for some migratory bat species.

Aren’t bats protected from wind turbines by government agencies enforcing the Endangered Species Act and other conservation laws? They're not.

“None of the migratory bats known to be most affected by wind turbines are protected by conservation laws,” writes Cryan, “nor is there a legal mandate driving research into the problem or implementation of potential solutions.”

Wind turbines have also emerged as one of the greatest human threats to many species of large, threatened and high-conservation value birds, after habitat loss from agriculture.

The expansion of wind turbines could result in the extinction of the golden eagle in the western United States, where its population is at an unsustainably low level.

Posted by Johnnygeneric at 6:00 AM No comments:


What follows is an example of how German decisionmakers go about protecting the environment: chop down hundreds of acres of forests and pour thousands of tons on concrete reinforced with hundreds of tons of steel on huge beds of gravel, all hauled in by hundreds of truck loads. Then install skyscraper tall industrial bird-killing monstrosities.

Result: an idyllic forest gets turned into an industrial complex that can be seen and felt from miles away – in order to protect the climate.

I guess these guys completely forgot that trees absorb carbon dioxide.  Which means the PTB are either really stupid or are pushing an agenda to fill the pockets of a sector that will in turn fill their own pockets.

This reminds me of the hundreds of thousands of birds that includes some endangered and protected birds. But since wind generated power is "green", well dontcha know, it's A-OK!  But as far as I know NOT ONE farm owner has been prosecuted for this.


Posted by Johnnygeneric at 5:54 AM No comments:

The idea of burning metal for power or even propulsion has been around for a long time.  In fact, thermite is a mixture of iron oxide and aluminum powder. Solid fuel rockets use metal powder as well.

So it's not a stretch to ask if metal powder, in particular, iron, could be used to generate power.  And now we find out Holland is working on this.


The technology, however, is still in its infancy. It currently generates 20 kilowatts (kW) of power in a single cycle, which is as much as a domestic boiler. Industrial applications would require at least 80 megawatts (MW) – 4,000 times as much. This summer, the process is expected to hit 100 kW.

“We want to show that the energy transition is achievable and that we can overcome today’s energy problems,” Ruyters affirms, and companies such as Shell and Uniper, two of a total of ten backers of the project, have been infected by this optimism. The North Brabant region is also subsidising the project, and in future the scientists will also be working at the local innovation and research centre Metalot.

And the real beauty of the process is that the iron oxide can be converted BACK into iron. The idea is to use solar energy, when it is available to convert the iron oxide.  Here is a copy of the illustration from the website: 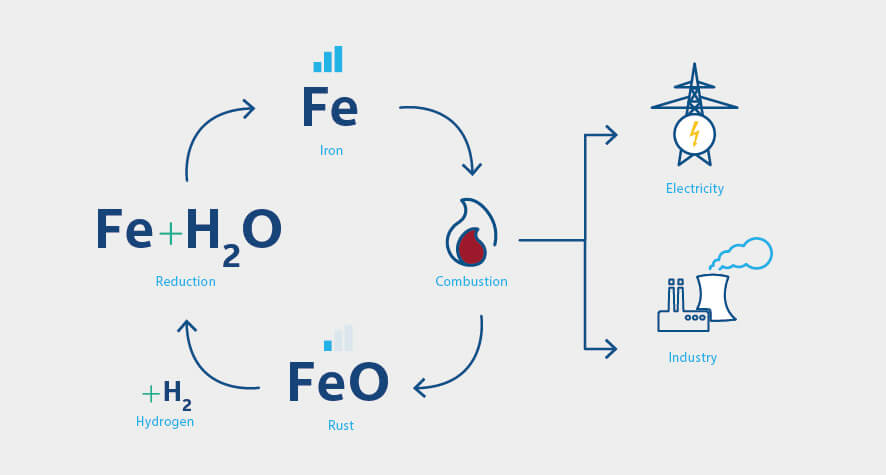 Of course, the reasons they are doing this is not because we may run out of natural gas or to wean themselves off of Russian natural gas due to conflicts of loyalties with Western Powers.  No, their reason is to help fight Global Warming.

Personally, I find the idea appalling and disgusting.  But, ok, be that as it may.  I like the idea of having an alternative path for power.  And especially for the reasons I mentioned above. Western Europe has found itself drifting toward alliances with powers that don't have their best interests at heart.  Metal Powder power plants will give them back their independence.


Posted by Johnnygeneric at 6:05 AM No comments:

There is certainly only one thing that Industry needs besides steel and equipment.  And that is ENERGY.  Not just energy when the sun is up and the wind is blowing.  It needs it 24/7 all year long.

To constrain Industry to only renewable energy is to call the Funeral Horn for the advanced news of the Death of European Industry.

From this point on, the only projects that will be funded will be small ones - on the order of $10 - 50 million .  That's a guess on my part.  But for sure you can completely forget the development of multi billion dollar/Euro projects.  From the AP:


“We will stop financing fossil fuels and we will launch the most ambitious climate investment strategy of any public financial institution anywhere,” the EIB’s president, Werner Hoyer, said in a statement.

Calling climate “the top issue on the political agenda of our time,” Hoyer noted scientists’ warnings that the planet is heading for a 3-4 degrees Celsius (5.4-7.2 Fahrenheit) increase in global average temperature by the end of the century.

“If that happens, large portions of our planet will become uninhabitable, with disastrous consequences for people around the world,” he said.

The 2015 Paris climate accord aims to cap global warming at no more than 2 degrees Celsius (3.6 Fahrenheit) by 2100 compared with pre-industrial times.

The policy change —which will also see the EIB prioritize lending for energy efficiency, low carbon technology and grid improvements — comes as the EU tries to ratchet up its climate efforts.

My prediction:  Massive numbers of people leaving the EU to reside in countries that aren't trying to strangle their own countries.

We welcome all Europeans to live in the USA.  WELCOME!!


Posted by Johnnygeneric at 6:33 PM No comments:

Cabon Tax in our future?

I had to attend a "sustainability" meeting at work today.  I'm glad I'm just a contractor and not a direct employee of the company.  One person said a carbon tax in the USA is in our future.  It could be as much as $40 per ton.

Well, we better hope not!

Here's a good youtube video that discusses the ramifications of such a tax.  Something the people in Canada are having to grapple with already.  The government leaders really don't give a SHIT about the environment.  They just want your MONEY!!

Posted by Johnnygeneric at 9:35 PM No comments: