I've been around for a number of years.  I've seen how various technologies have progressed.  I recall a one-panel cartoon that showed a person at a booth - like something you would see at the fair and a banner saying "Calculators on a stick".  If there was anything that could encapsulate the maturing of technology, that was it.

And there is one fact: Once it's offered in multiple colors, the technology has peaked - with a few exceptions.

- Cassette tapes.  This is probably the first example.  Many brands had been out by the end of the 70s. And then by the mid-80s or possibly a little later, the swirl of colors came out. 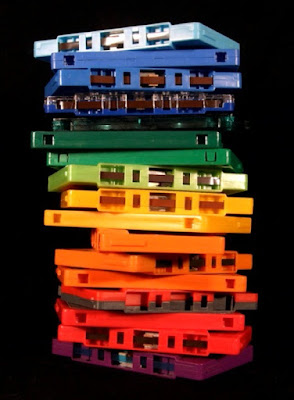 - FloppyDisks.  With the exception of 5 1/4" floppies, the 3 1/2" floppies are the next example of a peaking technology.  First, they were single sided single density.  Then they were  double sided single density and double density.  Then there were specialized higher density floppies that never caught on, thus brining an end to squeezing all you can out of a technology.  But just offer it in a multitude of colors and BAM!  they sell.

- CDs. This is an exception to the guideline.  CDs generally are the same - now, anyway.  CD-Rs are what have been available.  But this is all old news of which most people are aware.  So, if you want to make money, what do you do?  You sell in giant bulk!


- USB Memory sticks Well, what can I say?  They've been available in various forms and colors for some time.  But when I saw the above in a large bin near the check-out line, it was clear: memory stick technology had peaked. 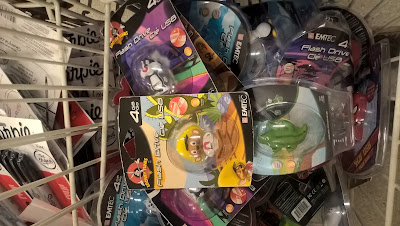 - Cell phones  This is a technology has has been evolving for a couple of decades now....or something like that. Battery power has improved, a camera was added, cell tower locations are still improving, faster data transfer, smart phones, on and on.  Wow, if there is any technology that has seen rapid devlopment it's cell phone technology

But there I saw this.  iPhones offered in a delicious assortment of colors.

Oh no.  Cell phone technology has peaked.  Yeah, sure, cases galore have been available.  But to OFFER the cell phones in a prescribed set of colors is what we have here.   My prediction:  swirl colors.  Maybe paisley.

Posted by Johnnygeneric at 9:57 AM No comments:

The project reached a milestone last month.  They completed the 10 mile piple line from the project location to San Diego which will be receiving the much needed water.  Here's info from their website on the desalination plant:

The site of the desalination plant is a 6-acre parcel in a portion of the site that leaves the majority of the EPS property open for potential recreational or redevelopment activity at some future date.

The desalination facility will conform to the 35 feet height limit in the Local Coastal Plan and the building design has been enhanced to ensure compatibility with future land use in the area.

The remaining water, 50 mgd of seawater with an elevated salt content, is returned to the discharge channel where it is diluted with additional seawater prior to being discharge to the ocean. This ensures that the increased salinity will not impact the marine organisms in the vicinity of the discharge channel.

Posted by Johnnygeneric at 6:18 AM No comments:

Email ThisBlogThis!Share to TwitterShare to FacebookShare to Pinterest
I talked about Houston before here. Their pensions is in a terrible mess.

Here is the Bloomberg article.  The nerve racking thing is, all this could go south in a twinkling of an eye.

Moody’s, which in 2013 began using a lower rate than governments do to calculate future liabilities, has estimated that the 25 largest U.S. public pensions alone have $2 trillion less than they need. Cincinnati and Minneapolis are among cities Moody’s has since downgraded.

They talk about not only Houston, but Chicago and, of course, CA.


Posted by Johnnygeneric at 6:09 AM No comments:

Oh yeah?  And how long will you "allow" that to last?

Asked by the MSNBC host whether a bakery whose owners have religious objections to the ruling should be compelled by the government to bake gay wedding cakes, Baldwin insisted that religious free speech has no place outside churches, synagogues or mosques.

“Certainly the 1st Amendment says that in institutions of faith that there is absolute power to, you know, to observe deeply held religious beliefs. But I don’t think it extends far beyond that,” she said.

This is just rich.  So, while you're IN the church you can say whatever the hell you want.

The really sad part is, she will get reelected over and over again.  No one will even notice her twisted moral compass.

Posted by Johnnygeneric at 6:16 AM No comments:

$5 for a dozen eggs in California?

Klippen said in California shoppers are seeing even higher prices than elsewhere in the country due to recent legislation.

Prices are already that high in some California stores. In Sacramento's Safeway stores, a dozen of Eggland's extra-large eggs costs $5.09. In comparison, the same brand of eggs costs just $2.49 in Safeway's Portland, Oregon locations.

After seeing prices dip a bit since the start of the year, shoppers in Sacramento's Folsom Boulevard Savemart location are upset that prices were once again on the rise.

Such are the unintended consequences of laws!!

Posted by Johnnygeneric at 12:46 AM No comments:

I call compelling, nay, FORCING someone at the point of a gun (the LAW) to do somehting against his conscience FORCED INDENTURED SERVITUDE.

“The gist is that one side … is defending the First Amendment rights of artists like Jack Phillips to create expressions consistent with his beliefs and to avoid creating expressions that violate his belief,” Jeremy Tedesco, senior legal counsel with Alliance Defending Freedom, told The Daily Signal after representing Phillips at the hearing.

“The other side of the case thinks there are no First Amendment rights in the commercial context and once you open a business, you cede all First Amendment protections.”

This was done by the British and is what led to the Was of 1812.  The Royal Navy would capture American seamen and force them to join the Royal Navy.

The issue of impressment, by itself, was not cause for war, even after the Leopard and Chesapeake incident. But impressment was one of the reasons given for the war by the War Hawks, who at times shouted the slogan "Free Trade and Sailor's Rights."

How is this different?

We want FREE TRADE AND MERCHANT'S RIGHTS!
Posted by Johnnygeneric at 8:56 PM No comments:

There really is no such thing as a free lunch. Only lunches of variable cost. And if we increase the cost of one of the major inputs into such lunches then something else will give. Here, as a result of the rise in the minimum wage Chipotle has raised prices in that specific location where the minimum wage rise occurred.

As we’ve been saying all along: a rise in the minimum wage really does destroy jobs.

Posted by Johnnygeneric at 7:00 PM No comments: