Yet another example of the stupidity and Leftist insanity coming out of CA.  And the vast majority of CA'ians even in the depth of increasing poverty double down and vote more Dems and Leftists into office.  The complete and total collapse of CA will be the whamming sound herd all over the world.

But by that time it will all be too late.

And what do you think the over-controlled farmers will do?  Will they stay?  I doubt it.  What evil and stupid people rule over CA.

And when the crash occurs, you will see the population of CA be cut in HALF as the inhabitants will flee when they see there is nothing left of their "paradise".

Despite strong opposition from farmers, Gov. Jerry Brown signed legislation in September that for the first time regulates heat-trapping gases from livestock operations and landfills.

Cattle and other farm animals are major sources of methane, a greenhouse gas many times more potent than carbon dioxide as a heat-trapping gas. Methane is released when they belch, pass gas and make manure.

"If we can reduce emissions of methane, we can really help to slow global warming," said Ryan McCarthy, a science adviser for the California Air Resources Board, which is drawing up rules to implement the new law.

Livestock are responsible for 14.5 percent of human-induced greenhouse gas emissions, with beef and dairy production accounting for the bulk of it, according to a 2013 United Nations report.

There are hundreds of thousands of wild animals and birds who defecate, filling the forests and fields with waste that then decay to form methane.  Can anyone control them?  No.

The waterways and rivers, streams, ponds, lakes are filled with fish and even more vegetation that decay, releasing even more methane into the atmosphere.  Can the CA Leftists control them?  No.

What a stupid idiotic peoples we have become.

Posted by Johnnygeneric at 12:58 AM No comments:

The truth of Communism is laid out for all to see.

I should have been impressed. And maybe I was in a way, but not for long, because the truth was there in front of me—the reality of Cuba itself. It was—you could find no other words—a communist shithole.

After a week, I was desperate to get out, as were the mostly leftist filmmakers who were with me, one of them even a member of the sainted "Hollywood Ten." The problem was, getting out wasn't so easy. We were stuck for ten hours at Havana Airport waiting for our semi-illegal charter flight from Miami to be allowed to land. I don't have to tell you that I and the rest of the group were sweating—and not just from the humid weather. Suppose we had to spend the rest of our lives in the "Marxist paradise"?

Posted by Johnnygeneric at 3:04 PM No comments:

The Real War on Science

Leftists are so anti-science as to be pathetic.  How the hell they managed to control our colleges is a mystery to me.

Environmental science has become so politicized that its myths endure even after they’ve been disproved. Rachel Carson’s Silent Spring set off decades of chemophobia with its scary anecdotes and bad science, like her baseless claim that DDT was causing cancer in humans and her vision of a mass avian die-off (the bird population was actually increasing as she wrote). Yet Silent Spring is taught in high school and college courses as a model of science writing, with no mention of the increased death tolls from malaria in countries that restricted DDT, or of other problems—like the spread of dengue and the Zika virus—exacerbated by needless fears of insecticides. Similarly, the Left’s zeal to find new reasons to regulate has led to pseudoscientific scaremongering about “Frankenfoods,” transfats, BPA in plastic, mobile phones, electronic cigarettes, power lines, fracking, and nuclear energy.

The long-term risks are certainly worth studying, but no matter whose predictions you trust, climate science provides no justification for Obama’s green agenda—or anyone else’s agenda. Even if it were somehow proved that high-end estimates for future global warming are accurate, that wouldn’t imply that Greens have the right practical solution for reducing carbon emissions—or that we even need to reduce those emissions. Policies for dealing with global warming vary according to political beliefs, economic assumptions, social priorities, and moral principles. Would regulating carbon dioxide stifle economic growth and give too much power to the state? Is it moral to impose sacrifices on poor people to keep temperatures a little cooler for their descendants, who will presumably be many times richer? Are there more important problems to address first? These aren’t questions with scientifically correct answers.


Posted by Johnnygeneric at 9:26 AM No comments:

Liberals’ California dream of secession will end up a nightmare

Go ahead!  Do it!  Become the tin horn communist dictatorship you have all hoped and longed for!

Then we'll have to build a wall around CA AND Mexico to keep the fleeing masses out.

An independent California run by progressives may seem like a dream, but it would end up being a total nightmare. Places like East L.A. would look more like East Berlin.

First and foremost, the state would need to be divided into the 24 counties that voted for Donald Trump. Also, an additional five counties only supported Clinton with a plurality of a vote — they’d probably like to stay in the U.S. as well.

The independent nation of California also runs into the problem that it’s dependent on other states for water. Large portions of Southern California gets its water from the Colorado River; the biggest reservoirs are located in Arizona and Nevada.

Rain and bottled water are not enough to keep SoCal going. An independent California means importing water from a foreign country and tax on the source.

Given the state’s tendency to have massive wildfires and earthquakes, a natural disaster would also impose an even greater strain on the new country.

After the problem with natural resources, you’ll also face an economic difficulty. The middle class is shrinking, and the California Department of Finance reported on November 16th that there’s a tax shortfall of a billion dollars this year.

Liberals love to whine about income inequality, but California is a cesspool of problems. It’s not just expensive cities like San Francisco either where conditions have worsened.\

And wait until you see the flight of businesses from the Kingdom of CA!!

Posted by Johnnygeneric at 9:17 AM No comments:

Prop. 67 went into effect immediately after being approved by 52 percent of statewide voters on Nov. 8.

“Because they are just ripoff. I don’t want to pay for a plastic bag,” one man declared.

“Ten cents a little too much for me,” another man said.

Shoppers shared their two cents. “Bags should be free. I recycled them. Why should we have to pay for it?” a third man said.

A grocery store employee, who asked to stay anonymous, said shoppers were taking their anger out on her. “It involves lot of cussing. They’re not taking it very well,” she added.

I think I covered this in the past.  The grocery stores LOVE the plastic bag ban.  They make money charging you for these bags.
Posted by Johnnygeneric at 2:14 AM No comments:

The slow bleeding of Illinois continues. 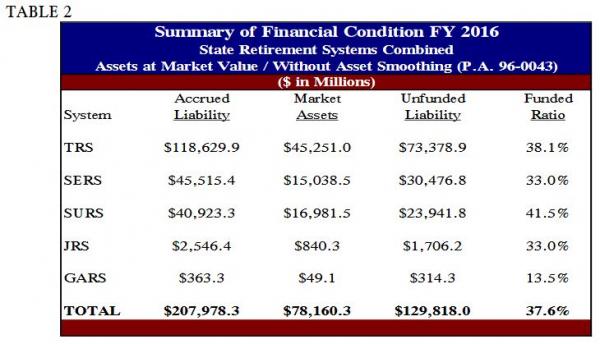 As a guide, here is a recap of the acronyms used by CGFA:

Posted by Johnnygeneric at 2:09 AM No comments:

Why would anyone want to endure all the trevails and problems of living in this state?

The top three cities are in CA,,,,just ahead of Detroit.  How pathetic is thsat? 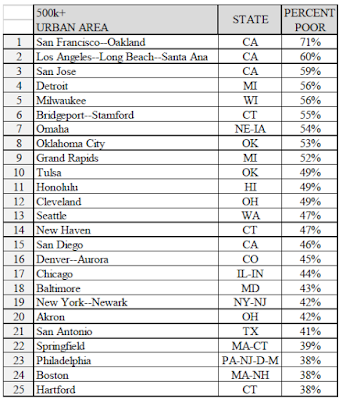 Posted by Johnnygeneric at 3:51 AM No comments:

Hillary, who cried her eyes out when she lost the election, would not have been  able to shoulder the shear HELL that is coming.  Of all the candidates, only Trump understands the economic black hole we are headed for and what his ultimate mission will be.

Because narrow policy does not matter. At the end of the Long Credit Cycle, policy is nothing. Soon enough we will be at the mercy of the forces of wild nature in the bond markets, the lifeblood of our abstracted civil society.

The deflationary spiral is a feature, not a bug. Our money came to us ex nihilo, and back there it shall go, as debt-defaults mount and Irving Fisher's nightmare is realized. The strategy to prop up asset values until growth and animal spirits return is a terrible failure. Now we have to face the consequences of the even greater malinvestment of capital than before, and the experience will be brutal.

The object, the great task, the World-Historical Mission of Donald J. Trump is to keep the United States whole, to maintain its order and integrity as we pass through the great crisis of Kondratieff winter on the credit cycle. Debts that cannot be paid -- won't be paid -- and that includes perks like Social Security, defined-benefit plans, pensions, your bank account. They are all dust, as we will learn soon enough. Guess what -- Donald already understands this, he knows we are dead broke.

Trump is in Abraham Lincoln's shoes now; his job is to preserve the Union, to reassert the Republic, and to enable us to survive as a nation. Debt-deflation will trigger a monetary collapse and final implosion of the fiat $USD, causing widespread disorder and the destruction of many of our institutions.

Posted by Johnnygeneric at 9:58 PM No comments: