And yet again, CA is CA's worst enemy.

"We're going to be mandating that every single person in this state have insurance," said state Sen. Ed Hernandez (D-West Covina), chairman of the Senate Health Committee and leader of the effort to expand professional boundaries. "What good is it if they are going to have a health insurance card but no access to doctors?"

Hernandez's proposed changes, which would dramatically shake up the medical establishment in California, have set off a turf war with physicians that could contribute to the success or failure of the federal Affordable Care Act in California.

Doctors say giving non-physicians more authority and autonomy could jeopardize patient safety. It could also drive up costs, because those workers, who have less medical education and training, tend to order more tests and prescribe more antibiotics, they said.

I recommend you go back and read my blog on Obamacare that I wrote shortly before Obama was re-elected.  My timing is off but the idea was to list the consequences of Obamacare and hang a date on when it would occur.

The federal government relies more on nurse practitioners and physician assistants to treat patients. But this doesn’t make the situation better. More wedges are being driven deeper between the doctor and his patient in doing this.

My first thought was "How could this happen?" So, I did a little more digging and this is what I found.

March 3, 2011 (3:49pm) – I received this email response from the LT: “Congratulations! You are now a licensed physician with the State of California. You can access your license number off our web site. It was nice working with you.”

And that’s how I became a licensed physician in the state of California. Of course, the clinical job I was interested in in 2008 — for which I’d originally applied for a CA license — is now long gone, life has moved on, and I just bought a house on the beach in South Carolina.

So if you live in California and are having a hard time finding a doctor, perhaps it’s because physicians like me are being effectively prevented from working in your state by its own medical board? I bet you hadn’t thought of that.

Here is the bar graph included with the article: 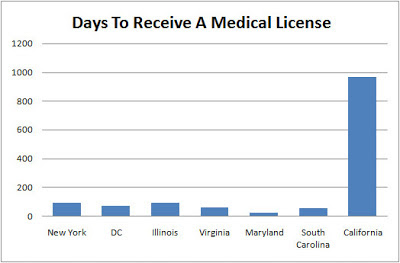 THIS IS WHY!  So, CA...are you going to do something about it??  Or will you guys just accept second rate care?

Posted by Johnnygeneric at 6:31 AM