And so it begins.  I think that all the stars are aligned....

The first LNG shipment from the US Lower 48 will has departed Cheniere Energy's Sabine Pass liquefaction project in Cameron Parish, Louisiana, Reuters reported late Wednesday. The LNG was loaded onto the LNG carrier Asia Vision, chartered by Cheniere Marketing, and is bound for Brazil.

Earlier Wednesday, the Houston Chronicle reported Meg Gentle, vice president of marketing at the company, as saying at CeraWeek, “They’re still loading it at Sabine Pass and it’s expected to depart the facility later today as it makes its way to Brazil.” The Asia Vision departed the dock at the Sabine Pass terminal at 7.39 p.m. CST last evening, according to Reuters shipping data.

The first cargo of approximately 3 Bcf of LNG is being shipped to Petrobras, Gentle said, confirming a Bloomberg report from Tuesday.

Neal Shear, Chairman of the Board and Interim CEO of Cheniere Partners, said in a statement earlier Wednesday, "Today we will finish loading the first commissioning cargo of LNG from our Sabine Pass LNG terminal. This historic event opens a new chapter for the country in energy trade and is a significant milestone for Cheniere as we prepare Train 1 for commercial operations."

This also coincides with the bottom for the price of natural gas: 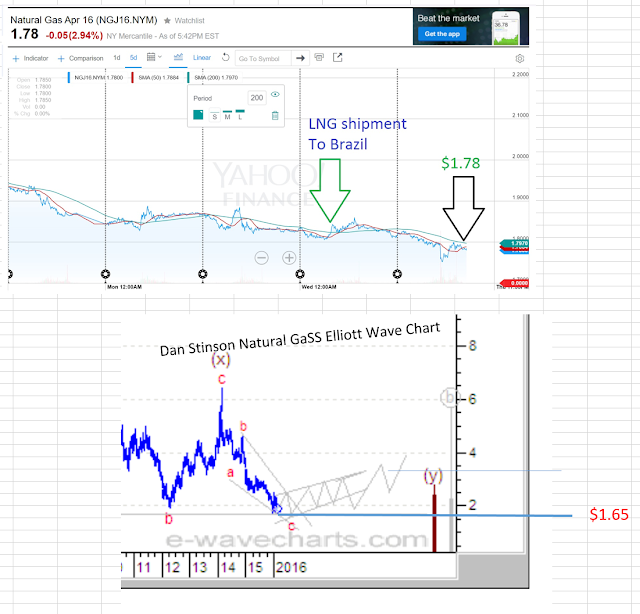 Posted by Johnnygeneric at 4:55 PM