This is the smartest thing a state can do in the face of a Federal Government multiples of trillions in debt.  Keep the state running when things go horribly bad.

Nationally, rainy day funds held $51.9 billion in fiscal 2016—more than before the recession in both nominal dollars and as a share of government expenditures, according to data collected by the National Association of State Budget Officers (NASBO). States had set aside enough in these funds to run operations for a median of 19.1 days in fiscal 2016, or 5.2 percent of general fund spending—more than a median of 16.6 days, or 4.6 percent of spending in fiscal 2007. Early estimates indicate a slight decline in the median amount held by states in fiscal 2017, to 18.6 days, or 5.1 percent of expenditures.

Since the Great Recession, most states have been rebuilding their rainy day funds, as they did after the 2001 recession. However, a number have struggled to save given sluggish tax revenue growth. For example, New Jersey drained its rainy day fund in fiscal 2009 to help ease the budget crunch it faced as a result of the recession and has not managed to replenish it at all since then.

Here's a map showing how many days of revenue is set aside when things go very bad.  NV, NJ, IL, WI, NM, PA are all up the creek without a paddle. 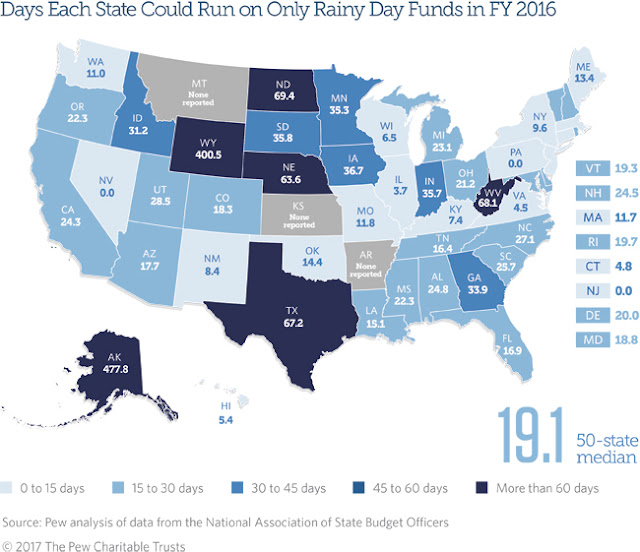 Posted by Johnnygeneric at 7:09 AM