"Let no one deceive you by any means; for that Day will not come unless the falling away comes first..."

In 2003, in the province of Quebec, some 2,751 places of worship were identified by Quebec’s Religious Heritage Council. Since then 400 have closed. Quoted by Post Media, Council project manager Denis Boucher says the rhythm of closures is increasing, “A church closes every week. It is a huge phenomenon”.

While Christian churches are being closed in Canada due mainly to diminishing congregations, the influs of newcomers means many other religious communities are growing in Canada.

While many churches have been torn down to make way for other uses, such as condos, in some cases, when a Christian church is put up for sale, it will be saved and converted to another religion.

As one Windsor resident said regarding St George’s, “Once a building is gone, you can’t get it back”

I supposed that "influx of newcomers" is referring to Muslims.

A graph showing the emptying of the Canadian Soul: 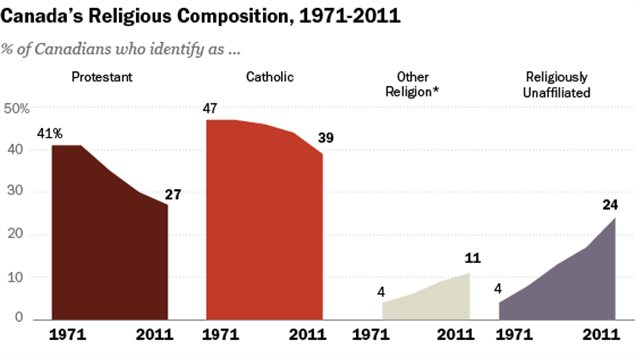 Posted by Johnnygeneric at 1:13 AM