By 2024, the scenario saw global food prices spike by as much as 395 percent due to prolonged crop failures in key food basket regions, driven largely by climate change, oil price spikes, and confused responses from the international community.

The report notes that at the end of the simulation, the teams highlighted the important role of “extreme weather events” and “food insecurity” in exacerbating “instances of significant internal and external migration and social unrest.” These, in turn, greatly “contribute to conflict.”

I find the time period they decided to use a little interesting.  They say the period 2020 - 2030 was a bit arbitrary and not a forecast.  I find this language a bit insincere.  This period "coincidentally" falls near the bottom [I originally said the beginning-JG] of the  Kondratieff  "Winter Cycle".  This is the time period the stock market crashes and what will be called "The Greater Depression" where the USA will probably have a higher unemployment rate greater than we've ever seen in our history as a nation.

Here is a rather busy chart put together by The Longwave Group that shows when The Greater Depression should start.  Somewhere in the early to mid 2020s 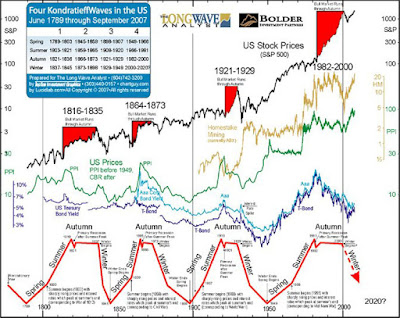 Posted by Johnnygeneric at 11:20 PM