FINAL PROOF THERE IS NO SUCH THING AS EVOLUTION! ONLY DEVOLUTION

I was bemused when I first read this.  But the implications are actually very frightening.  It proves that we have not learned from the past and we are certainly doomed to repeat it.

Fascism, and the rise of Hitler have been linked to warming temperatures.  Thus says an article written in 1941.  O.M.G.

Increasing warmer temperatures throughout the world may produce a trend toward dictatorial governments in the opinion of Dr Clarence A Mills, professor of experimental medicine at the University of Cincinnati. In fact, Dr Mills believes that the rise to power of Adolf Hitler in Germany and Benito Mussolini in Italy may be due in part to the gradual warming temperature of the world. --The Mason City Globe-Gazette, 27 March 1941 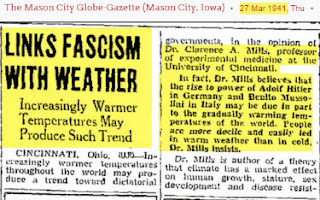 Posted by Johnnygeneric at 12:32 AM