Venezuela Is Selling Off Gold Reserves as Bond Payments Loom

First before we start talking about, let's jump into our way-back machine to 1999. We see this headline: 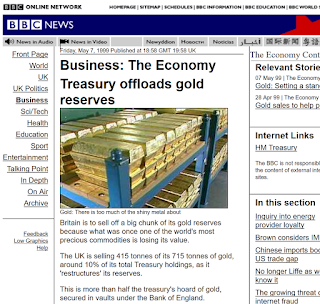 Yes!  In 1999 The UK sold off a significant portion of their gold:

The UK government's intention to sell gold and reinvest the proceeds in foreign currency deposits, including euros, was announced on 7 May 1999, when the price of gold stood at US$282.40 per ounce[8] (cf. the price in 1980: $850/oz [9]) The official stated reason for this sale was to diversify the assets of the UK's reserves away from gold, which was deemed to be too volatile. The gold sales funded a like-for-like purchase of financial instruments in different currencies. Studies performed by HM Treasury had shown that the overall volatility of the UK's reserves could be reduced by 20% from the sale.

Now, let's jump back into the Way-Back Machine and go back to the future with Venezuela:

With $3.5 billion of bond payments due this week and next, the cash-strapped country’s international reserves are hovering near a 12-year low of $15.2 billion, including gold holdings that totaled $11.8 billion at the end of May. Notes from Venezuela, which relies on crude for 95 percent of export revenue, are trading at distressed levels with swaps contracts pricing in a 96 percent chance of default over the next five years.

OK....now, let's do the math and compare the UK sale to the Venezuelan sale.  The article mentions that the Venezuelan gold holdings are about $12 billion.  As of the article date,gold sold at 1178 per troy ounce.

I also read that the UK also sold half its gold in 1970-71.  Another disastrous decision.

In Venezuela's defense, what other options do they have?

If nothing, this could signal the bottom for gold.


Posted by Johnnygeneric at 8:56 PM