I sort of even hate to say this.  I, for one, expected inflation.  Apparently, there is something I missed.  However, having said that I know for a fact some inflation has hit.  But I trust John Williams of Shadowstats. And if his charts say inflation is low, then I believe it.  And low inflation doesn't mean low inflation across the board.  Since we have a diverse economy, somethings are inflating in price while other things are deflating in price.

And so we have many signals that commodity prices almost across the board are tanking.  First, we have the DDP ETN that is an inverse fund that when it increases, it means wheat, gold and oil are decreasing (among a few other commodities that I don't remember). 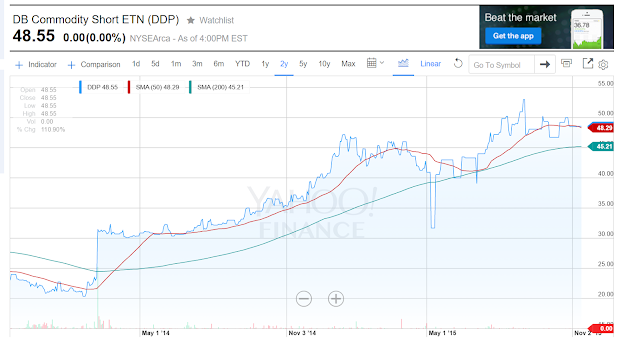 Now I read that farmers aren't doing so well.

Farm income fell sharply in the third quarter, according to respondents of the Tenth District Survey of Agricultural Credit Conditions. Although the Tenth District survey measure of farm income has declined for several consecutive quarters, the drop in the third quarter was especially severe. In fact, 68 percent of bankers reported lower farm incomes relative to a year ago (Chart 1). The downbeat expectations for farm income in the District were consistent with recent national forecasts. According to third-quarter revisions, the USDA expected farm income to drop 36 percent this year compared to last year.

Reductions in farm income have continued to raise concerns about the liquidity of some District farm borrowers. In 2015, 81 percent of bankers reported a significant or modest deterioration in the overall level of working capital for crop producers, up from 65 percent in 2014 (Chart 2). Expectations of further slumps in District farm income have caused agricultural lenders to continue to stress the importance of maintaining adequate levels of working capital, especially for highly leveraged producers.

Posted by Johnnygeneric at 8:55 PM