The Left is falling off the deep end. Meaningless studies that say nothing.

First there is this article: The hidden inequality of who dies in car crashes

What utter cow manure.  Two things wrong with this article:


Pray tell, what the hell more do you want?

Next, let's look at the graph.  Which at first glance appears a bit shocking.

But...what do you notice about the light red shading for those with a less than highschool.  The 95% confidence level is VERY WIDE.  For a confidence level to be this wide, it amounts to no more than a GUESS.  The graph becomes meaningless. 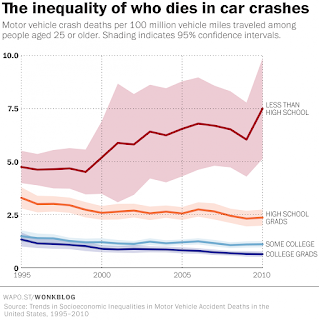 Essentially, what all this means is people who drive and have a less than high school education have made lifestyle choices that affect their driving ability.  You could put them in a 2015 Escalade...and they will kill themselves in a car accident.
The next article is called : The Inequality of who gets hit by cars.

The traffic deaths aren't distributed equally though. Native Americans, Hispanics and blacks are much more likely to die as pedestrians in traffic accidents than whites or Asian-Americans, according to the Centers for Disease Control and Prevention.

And now let's look at the graph: 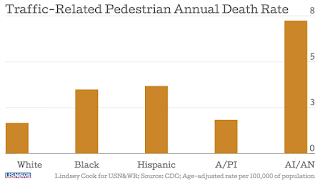 And then the psychological test.  Just icing on the cake:

When a black man was waiting at the crosswalk, drivers were less likely to stop. On average, the black participants waited 32 percent longer and had twice as many cars pass them by. The difference became more pronounced after the first car passed. Researchers speculated that seeing another car in front of them pass without stopping made other drivers feel that stopping wasn't as necessary.

Sorry, but if there is no stop sign or stop light, I DON'T STOP.  I don't care what color the pedestrian is.  The pedestrian should ALWAYS wait for traffic to clear.

The conclusion that blacks/hispanics are less likely to cross at the intersection or at a traffic light due to DISCRIMINATION leading them to cross in the middle of the street is COMPLETE STUPIDITY.  It would seem to me, that after a couple of close calls when crossing at the middle of the block the person would GET A CLUE that this is not the best place to cross.

Additionally, hispanics who have arrived here illegally have no concept of SAFETY like we do.  I know this for a FACT since I had to visit three refineries in Mexico.  Crossing in the middle of the block to them is no more or less safer than crossing at a corner with a light.

Otherwise, all things being equal, apparently, the authors of the study, being the racists they are themselves, don't think minorities are SMART enough to know that crossing from the middle of the block will kill them.

They need to go back to the drawing board on this one.


Posted by Johnnygeneric at 1:21 PM