Motley Fool: Angry About Wind Power Subsidies? So Was Texas

This is a pretty good and readable article on wind energy in TX.

Everything is bigger in Texas -- including wind energy. But bigger isn't always better, and the Lonestar state has felt its fair share of renewable energy growing pains. But like any cowboy worth his weight, the Texas is readjusting to come out ahead. Here's how.

Getting bigger When it comes to wind power, "deep in the heart of Texas" is exactly where generators want to be. The state has some of the strongest, most accessible wind in the nation, and it's quickly become wind power's home base.

Texas produced 36 million megawatt hours (MWh) of electricity from wind in 2013, more than any other state. Its closest competitor, Iowa, churned out a measly 15 million MWh in comparison. The reason for Texas' flurry of wind energy is three-fold.

Below is a wind speed map of the USA.  What you should look at are the midwest...and CA.  And I think I find this pretty curious.  CA has a very poor showing for wind speeds.  Because of this, I predicted that CA'ians shouldn't expect to extract a lot of its energy from wind.  And that's probably why the big push for solar. 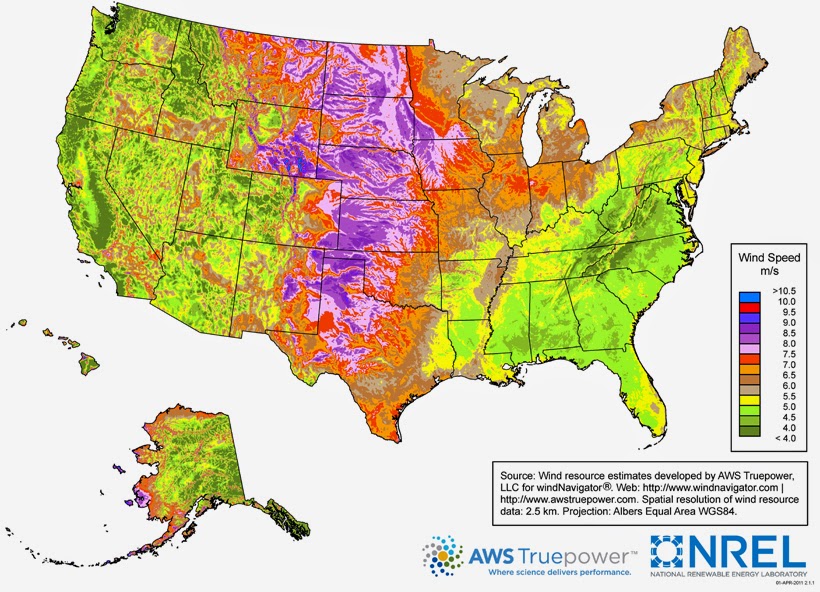 This is called an "80 meter map".  The description on the web sate says these are predicted annual wind speeds at 80 meters height.  But that still doesn't have a lot of meaning.  Are these average speeds Median speeds?  I would think that sustained speeds would be almost as important.


Posted by Johnnygeneric at 5:01 PM