For Years, Warnings That It Could Happen Here

Oh yeah.  Global warming.  Right.  Whatever.  I love the way they write this.  Like they are pounding the tale as they speak.

But what about this rising sea level?  To be honest, I don't know how you measure with any accuracy sea levels but people do it.  Here is a graph of the rising sea level at The Battery in New York State : 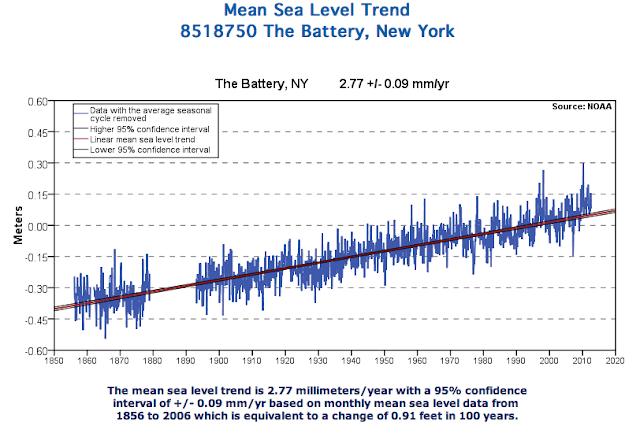 The important feature is to notice the last line.  0.91 feet is just under 11 inches in one hundred years.

Now, that isn't to say New York doesn't have a problem.  But it's not a problem brought on by Man.  And New York really should do something since they've been putting this off for 100 years.  But to bring up Global Warming (what they are doing is blaming anthropogenic Global Warming, I should clarify) is just opportunistic and disgusting.
Posted by Johnnygeneric at 6:38 AM