I expected to hear more of this during the runup on gasoline prices.  If I were to live in CA, I would definitely own one of these.

In Southern California, natural gas retails for about $2.04 per gallon equivalent, or more than $2.50 less than a gallon of gasoline. It sells for even less, about $1 gallon, for people who install home filling equipment that taps into their residential gas line.

The car offers another benefit for California drivers. The natural gas-powered Civic qualifies for solo driver access in most carpool lanes.

Honda is the only carmaker to sell a factory-built natural gas-powered sedan in the U.S.

With more natural gas filling stations opening, the incentive of carpool lane access and the high cost of gasoline, Honda believes this is a good time to pitch its natural gas Civic.

“The signs are pointing toward increased market acceptance of this type of alternative fuel vehicle,” said Angie Nucci, a Honda spokeswoman. “The $3,000 CNG fuel card could be a tipping point for more consumer consideration.”

That $3,000 fuel card sounds nice!!  Wouldn't you want to be laughing at the closed gas stations and poor car owners with no other alternative?? 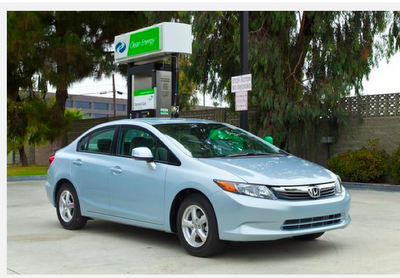 Posted by Johnnygeneric at 6:13 AM